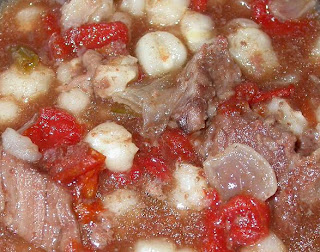 I can be a very lazy cook sometimes.  This morning I grabbed a few packages of frozen bone in sirloin steak from the freezer and plopped them in the slow cooker.  I piled on a diced onion, some gelatin, some tomatoes and green chilies, a handful of salt and a small chunk of bacon grease.  (You just can't go wrong with the aroma of bacon.)  Nothing was measured.

I got curious and added a can of white hominy.  Never had it before, smells like a soggy tortilla.  I wanted to know if it would be good for power outage food.  After cooking on high for a couple hours, I checked for "pull apart."  Pull apart is when the meat just pulls off the bone and the bones are used for broth one more time, given to the dog (depends on the bone and the dog) or the chickens/garden.  It needed a little longer as not all the meat was submerged, so the top pieces were still clingy.  An hour or so later and the meat fell off  while I removed the bones with my tongs.

So hominy in this dish kind of reminds me of bland, mini gnocchi....more of a soft texture than a taste. The sirloin is butter tender, but less interesting after the tongue.  Ummm...and I over did it on the salt a tad, so corrected with a little sugar and cream of tartar and .....Bingo!  It all came together just right.

Hmmmm....I bet some pineapple would substitute just fine for the sugar/cream of tartar flavor wise......

Here are some favorites posts.....

Some of my favorite websites....