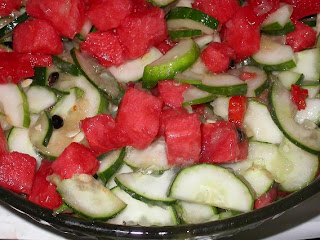 Dissolve the dry ingredients into the vinegar in the order listed and  add sliced peppers while heating. Stir and remove from heat when combined.  Let cool while the cucumbers are prepared.

I used organic cukes, so didn't bother peeling, just washed and wiped.  I used the end of my knife to reduce the number of seeds....but wasn't overly careful about it, as it shows in the picture.  I salted and stirred the cukes, then let sit while I prepared the watermelon.

I prefer the taste of seeded watermelon.  I think the taste is consistently superior to seedless watermelon...but use what is available.  I sliced with a sharp knife in a criss cross pattern, then loosened the cubes by slicing horizontally.  I held the watermelon over a separate bowl and they just popped out.

Drizzle sauce over cucumbers and stir.  Make sure it's mixed in thoroughly to avoid clumping of the gelatin.  Add watermelon and toss gently.  Serve immediately.  This recipe makes a potluck size amount of salad and is deceptively filling do to the addition of gelatin.  It would work as a light supper all by itself on a hot summer night.  I don't think it is a "keeper" type salad, I would recommend reducing the recipe for a small family supper or side dish.

Here's the original recipe: Watermelon-Cucumber Salad
I ended up doubling the sauce because it didn't seem to be enough...maybe my cucumbers were larger?  I used whole peppers and rice vinegar because I had them on hand and left out the onions because I didn't have any.  I added the gelatin...well, because I try to sneak it in where ever I can.

Lemon juice would probably substitute very well in this recipe.

P.S. I actually did end up with leftovers.  It tastes wonderful still...but the cucumbers are limp and tired looking.

Here are some favorites posts.....

Some of my favorite websites....